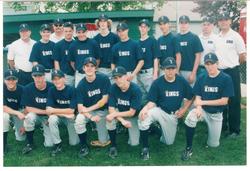 Our second season we picked up some new players, including future Kings' star, Curtis Matteson. We were also blessed to form a partnership with Stan Lovins, a former pro that owned his own indoor facility and let us practice there for free. Stan Lovins was a friend of Larry Moran and a vital asset to the Kings.

​The team had a lot more rain outs than the previous year and were only able to get in 16 games. The skill of our competition increased, and we had a few more losses than the previous year. However, our last game of the year was a 10-4 win against Class A powerhouse Covenant Christian, who had ten-run ruled us in 2005 Curtis Matteson pitched the whole game in a dominating performance to give us our greatest win to date. The Kings were 9-7 and coached by Larry Moran. 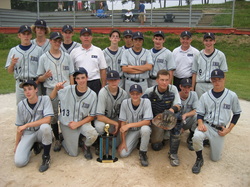 With our previous success, the 2007 Kings team picked up a lot more games against some great competition. The 2007 Kings had a strong senior lineup with players who had been on the roster since the beginning and were excited to go out with a bang. Among these original Kings seniors were Evan Wible, Joel Wesselling, Mark Mitchell, and Josh Sowders.

That year, Heritage Christian invited us to play in their mid-season tournament. The tournament included the host Heritage Christian, Guerin Catholic, the Indy Kings, and Southeastern High School. We were pitted against the number one seed, Heritage Christian in the first game. Heritage had obviously planned on us being an easy win for them to advance to the championship. In the first inning it seemed like that may be the case with Heritage scoring three runs. However, the resilient and experienced 2007 Kings fought back and tied the game at 3 with a double from Mike Judy. In the end, we lost a well contested game 5-3 as Heritage closed us out with their ace. In the consolation game we defeated a future regular on our schedule, Guerin Catholic by the ten-run rule.

It was an exciting and historic season for the Kings. The end of the season saw us playing in the newly formed Midwest Homeschool World Series in Fortville, IN where we had played all of our home games. The tourney consisted of teams from Wisconsin, Ohio, and Indiana with the introduction of a new homeschool baseball team from Fort Wayne. The Kings advanced to the championship game against Landmark Christian from Cincinnati, a very good team that consisted of a mix of homeschool and public schooled players. One of our seniors and a member of the original Kings, Evan Wible, hit a double off the centerfield fence to give us the first ever Midwest Homeschool World Series Championship. The Kings were 18-3 and coached by Larry Moran. 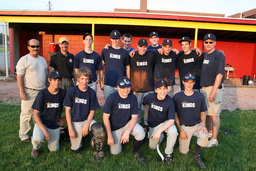 By this time, the Kings had made a name for themselves in the Indianapolis area among both private and public-school teams. Our success was a benefit to our schedule. We were able to build our toughest schedule to date, playing teams like Park Tudor, Brebeuf Jesuit, Lutheran, Beech Grove, and many more. This Kings team was gaining both establishment and reputation. We were experienced and full of fresh, young talent.

Under the leadership of the seniors and on the rocket arm of Curtis Matteson, the Kings won the Faith Christian School Tournament for the second year in a row. Following that victory, the Kings moved on to the Midwest Homeschool World Series in Fort Wayne, which we had won in its inaugural year the previous year. The Kings won the first two games, beating Summit (Michigan) by 10 and a New Jersey team with a walk-off hit from senior Andy Davis. The next game was lost to a very good Cincinnati Landmark (Ohio) team and then again to the eventual champion, St. Louis Patriots (Missouri). 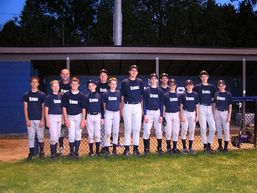 In 2009, the Kings played their most difficult schedule to date, facing 2A State Champion Heritage Christian, 3A #2 Park Tudor, and 4A #8 Brebeuf Jesuit.

The Kings lost 6-3 to Brebeuf, despite a complete game by Kent Judy (RHP, Jr).
Leading at Park Tudor in the 7th inning, the Kings lost on a 2-run walk-off home run on a 2-2 count. The Kings lost to an undefeated Milan team, despite five perfect innings and 11 strikeouts by Judy.


The Kings won the Christian School Tournament for the 3rd year in a row and went to the Midwest Homeschool World Series in Ft. Wayne where they lost the championship game to the Wisconsin Saints. The team was led by Joel Moran (LHP/1B, Sr), Alex Dowbnia (SS, Jr), Kent Judy (RHP/CF, Jr), and Josh Smallwood (RF, Jr). Moran, having played as an 8th grader, was the last original King from the inaugural 2005 season. The Kings were 15-2 and coached by Larry Moran.